“The world inside me expands. Even though my eyes are closed, I see my home.” 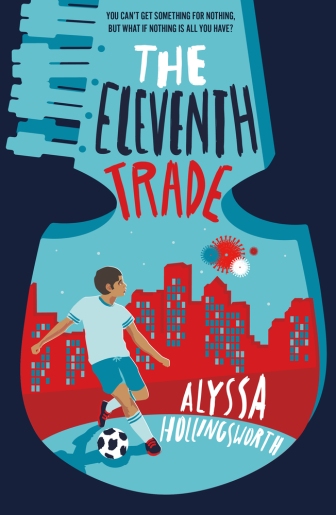 Back in Afghanistan, Sami’s grandfather was a famous musician. Even now in Boston, the sound of his instrument, the rebab, is the sound of home.

Then the rebab is stolen and appears in a shop for $700. Sami has no money and nothing to sell. What he does have is something to trade.

But there are two sides to every bargain, and Sami’s chance of success depends on the very last thing he wants– help.

Sami, a refugee from Afghanistan, begins to trade items with the kids in his new American school so that he can buy back his stolen rebab and gift it to his grandfather on Eid Al-Fith, a celebration that marks the end of Ramadan. Throughout his quest to bring the music of home back to Baba’s soul, Sami must confront his memories and learn to trust and accept help from his new friends.

This is a humbling novel that is full of the truths of the refugee crisis and the war, persecution and grief that lay in its wake. Alyssa Hollingsworth showcases the breathtakingly beautiful Afghan culture and challenges the xenophobic and stereotypical way that Islam is often portrayed in the media.

The plot is tight and fast-paced and every word has been carefully chosen. Sami is such a sweet, relatable character. His memories of his life back in Afghanistan– and the lyrical way Alyssa describes them– were completely immersive. The secondary characters are just as real and as complex as the protagonist, and Sami’s growing relationships with each of them are authentically portrayed. The scenes in which Sami experiences PTSD are painfully real and skillfully written and I finished the final chapter teary-eyed.

This is a vibrant, relevant book which reveals the terrible suffering of refugees, but nevertheless reassures us that there is always hope after trauma– and that new friendships can be the source of that hope.

The Eleventh Trade is an utterly moving debut and– in the current political climate–it’s exactly the kind of book we all need to read.